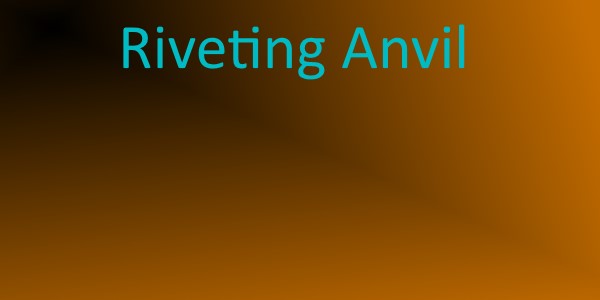 Is a riveting anvil right for your projects? Save your time and your money by becoming an informed artisan. Riveting anvils are rather straightforward, and may be used for riveting, forming, and working small parts. They are often used in the creation of jewelry by professional jewelers, and may also be used as a solid base for other small craft projects.

What is a Riveting Anvil?

A riveting anvil is simply a block of metal that contains holes, milling slots, and other deformations that are used to shape metal in a time efficient manner. These anvils are usually made out of steel or cast iron. While the metal type of an anvil may matter a great deal for larger anvils, most riveting anvils are smaller in nature, and either cast iron or steel will work.

Why Do I Need a Riveting Anvil?

Riveting anvils provide a stable platform on which to work. They also contain a variety of holes that may be used to guide the drilling/riveting process. This allows the crafter to work quickly while still maintaining precision. They are rather cheap, and may be purchased with just a few hours of work at minimum wage. Because of this, they provide a high rate of return, as a riveting anvil can greatly speed up the crafting process and allow you to focus on the design of whatever it is you are working on.

What Is a Rivet?

A rivet is a permanent mechanical fastener that is used to hold two materials together. A rivet consists of a cylinder shaft, where one end of the shaft has a mushroom shaped head. The opposite end of the head is the tail, and is generally the same shape as the cylinder. On installation of the rivet, the rivet is placed in a punched or drilled hole, and then the tail is hammered to expand past the original hole size.

In addition to bringing two materials together, a rivet is capable of holding both tension and shear loads. However it is better suited to shear loads, as certain bolts and screws handle tension loads better. If you are interested in the science behind rivets, I highly recommend you check out the wiki page over at https://en.wikipedia.org/wiki/Rivet.

While a riveting anvil is an incredibly useful tool, it’s not much good on its own. You also need a riveting material, the specifics of which will depend on your project. Many jewelry projects use a simple copper wire for example. You will also need a way of deforming the tail end of the rivet.

Again using jewelry as an example, you will probably use some type of hammer. The easiest hammer for these types of projects is obviously the riveting hammer! It’s designed for this purpose. But you can just as easily use some other type of hammer as long as you make sure to “push out” at the tail, causing the metal to flatten out faster. Don’t just hit straight down. Also make sure to turn the anvil so that you are not just hitting the rivet in the same spot over and over.

If you are looking for a heavier duty anvil for larger projects, make sure to check out my post on blacksmithing anvils!

All in all, a riveting anvil is an excellent addition to any workshop. For a very small price, you can increase the speed at which you rivet, allowing you to be more productive and focus on your larger goals. I love mine, and I wouldn’t trade it for the world!